Waiting on the White paper

So the government's White paper was the big news in academia. No surprises really. I was, however, pretty depressed by the comments in the Times Higher including one that read something like 'I wish I could retire'. My response? Well, do retire then and give your privileged job to one of my dear friends who have great research profiles, are inspirational teachers and yet can't get a full time post. It makes me madder than any government paper!

So we had our final exam board today and all was well. Was reminded by how wonderful our students are and how much hard work they put in last year. I've also been getting to grips with the ol' iPad and have transferred my research notes etc on to it. Am delighted with it and feel more organised already. Spent this morning faffing about with a mind map which really helped me to strengthen my structure in chapter five. When I've spent another couple of weeks faffing I'll post a blog post on academic apps in case anyone is interested.

We have been enjoying Wimbledon (go Roger!), a new offering from 'love film' ('The Fighter' with the always impressive Christian Bale - a bit sweary but very interesting), a lovely weekend with David's cousin and some fun reading. The book redrafting is going well and I'll get back to it on thursday. Tomorrow gives me a wee break as it's our faculty research day. Last year this event was really enjoyable and I'm looking forward to it again.

Anyways, a cup of tea beckons and some academic blog reading. All fun and games this end. Oh...and preparation for someone's birthday tomorrow...

Firstly, and most importantly, 'happy birthday mum'. Hope you're having a great day.

Since Tuesday it has been mostly book proofreading. I am two thirds the way through the third chapter so the introduction and chapter two are done. Lots of dull jobs like checking citation, making corrections and sorting out syntax. Fortunately I have Wimbledon to keep me company. The book was put on the back burner today as we enjoyed an afternoon of exam boards.

Apart from that I have been...losing at squash (though I played rather well), watching more Chinese films, tidying the flat, getting used to my iPad, learning more about twitter (still a bit of a mystery) and using my new tea set bought in Beijing. It's all rock n' roll here!

Anyways, D's cousin is arriving in a bit and there is still a bit of sorting to do so I'll leave it there. Have a great weekend one and all.

Manchester, is this love?

Sorry about the delay in posting this week. The weekend was taken up with much jolliness and our Internet has been a little dodgy since our return. I have spoken to the good folks at Virgin many times now but to no avail. Ho hum.

So what has been happening since last Wednesday? Well, on Thursday night we journeyed across to Stockport. Friday was spent working on the book. In the evening though we caught the train the Manchester to see Whitesnake at the Apollo. Now I was a little nervous about the whole evening. My last gig at the Apollo had been a teenage scream fest (Boyzone - I know, I know!) and I remembered it as a total dump. Friday night was also my first ever proper rock concert. I'm used to the prog circuit now but this was something else entirely. I needn't have worried. There was more fleece than leather, and the crowd were the most respectful, kindly group of folks you are ever likely to meet. The actual gig was loud and fun. Now there's a man who knows what to do with a microphone stand. It was summed up by the sweet fans on the front row who threw tea bags on to the stage for Coverdale to enjoy post-gig.

We enjoyed a lovely walk in Styal Mill on Saturday. This is a place I remember with great affection and it was lovely to wander round round with the parents. Smelly (sister) returned on Sunday so we could enjoy our first father's day together for many a year.

And now we are back to a week of exam board meetings and finalising the book. Today I finished the final read through of the introduction and worked on my bibliography. The latter is a very dull job but does mean that I can have Federer on the telly at the same time as it requires very little actual brain power. I love Wimbledon!

We're continuing with our Chinese films. Last night it was Hero, another beautiful film that made me cry. I am such a wuss at the moment.

A cup of tea beckons.
Enjoy the week folks.
CSW

P.s. Apologies for the brevity and the slightly stilted expression. I am using my new iPad given to me as a present from someone very special. Thanks so much! It is going to make a massive difference...once I've worked out how to type with more than one finger!
Posted by Claire at 19:33 No comments:

This was my response to this week's episode of Game of Thrones. Well, we didn't see that one coming! This week has been a jolly mixture of book writing, HEA teaching courses (brilliant - the good folks at CERD are just terrific!) and some lovely play reading. It has been mostly the big hitters of Modernism: Eliot and Yeats. The Book is coming to an end. After the afternoon's session I can really see the finish line.

On Saturday D and I spent all day at home. We even got takeout pizza for tea. What made us so unbelievably lazy, you ask? Well, D was grappling with photographs so you good folks can enjoy our China snaps. He then redesigned my website. It now looks amazing! Check it out. I'm delighted with it. I am also now on Twitter. D has been on this social network for a while now but I have resisted. I am not on Facebook and have some ethical issues with social networks that I won't bore you with. But Twitter feels a little different. I am really enjoying engaging with folks through this medium. Lots of academic institutions now make their announcements via Twitter so it is definitely the way forward. If you are a Tweeter then you can follow me if you go to 'follow me!' on the new website.

Two new China-based films dropped through our doors from Love Film this morning so I'll look forward to seeing them. And we're off to Stockport tomorrow. On Friday night we are going to be enjoying the jolly rock sounds of Whitesnake. I'll write a wee review early next week.

In the meantime, enjoy the week.
CSW
Posted by Claire at 20:32 No comments:

Reflections on China: the full story

So, as promised here are some thoughts about our trip to China. If you have time and a large cup of tea then check out our photos taken (mostly) by D with his new camera. There is a slide show flicking away to the right of the blog under my lists. This is the cut down album - we started with nearly a thousand so brace yourself...

Reflections on China: the prologue

Evening folks,
We've just arrived back after a jolly cinema/Nando's combo. Tonight's film was the new X Men flick and very good it was too. I really like this franchise - intelligent movies with lovely cinematography and really engaging characters. This evening's offering was a great addition to the series. And the delicious Hugh Jackman made a wee cameo appearance. I'd definitely recommend it.

We haven't got our holiday photos online yet as Nikon, in their wisdom, do not include a USB cable with their new cameras. D is waiting for one to arrive from Amazon so for the moment you'll have to make do with a couple of snaps from the iphone. When the photos are up (and I have had some time to think about it all) I'll post some real reflections on our Chinese adventure.

Here's one for all you plane enthusiasts. We flew on the Airbus A380, the biggest plane in the skies. Here it is at Beijing Airport with its little brother from British Airways next to it: 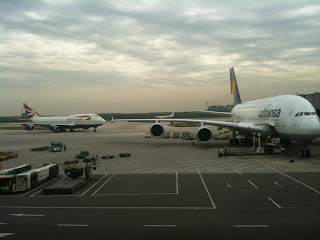 Wandering around Tiananmen Square at night was an incredible experience. Everyone was super friendly and even late at night we felt totally safe and well looked after. 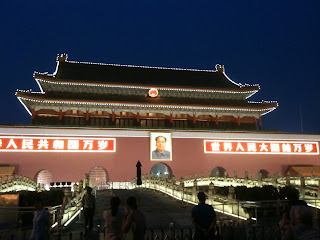 We really loved the English translations of signs. They were always polite and read a little like an essay by an undergraduate who is trying too hard. Here is D standing next to one of our favourites: 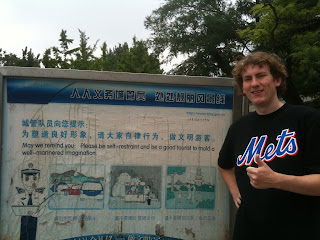 And finally for the time being, here is a wee film. D's favourite thing about plane travel is being able to watch back-to-back movies. On the way home they were showing The Edge with Sir Anthony Hopkins (one for all you Kermode fans there). He was slightly surprised by this as, and I quote, "I'm sure that film has a plane crash in it". Everyone knows it is poor etiquette to show an air disaster film while zooming through the air at a gizzilion miles an hour at 30,000 feet. But, in a moment of true comic genius, D managed to capture what the good people of Lufthansa decided to do with the dreaded crash scene.


Anyways, that's your lot for tonight. I'll probably post a more comprehensive response to China at the weekend. Between now and then it is Book, some faffy admin jobs and some serious flat tidying.

Enjoy the week folks.
CSW
Posted by Claire at 23:12 No comments:

...just to say that we have arrived back safely from China. Phew, that was a quick week! I'll post further about our trip in the next few days and the photos should be up and about by the end of the week in case you are interested. Suffice to say, it was amazing! D and I couldn't believe some of the things we saw and experienced during our seven days. We were welcomed wherever we went. So if you would like to read stories about eating snake, hiking the Great Wall, trying pea ice lollies and D becoming a Beijing celebrity then check back over the coming days. While D gets another day off to recover, I am back to work today and can't wait to get cracking on the Book. We always love our holidays but we are always glad to get back into things here too. Enjoy your day one and all.