Happy New Year one and all!

Christmas and New Year were all good fun chez Warden despite there being a lot of yucky illness about. We were up in Edinburgh for the duration so got time to chill out, play with our amazing nieces and eat far too much delicious food. We rang in the new year watching the fireworks and lasers over Edinburgh Castle.

I had one day back at home before heading off to New York with over 1000 De Montfort University students. This (rather mad!) trip was organised as part of DMUGlobal, an initiative that pledges to send as many students as possible overseas to experience different cultures and see a bit of the world. I co-led the Performance in New York part of the trip. We encouraged our students (from Drama, Dance, Performing Arts, and Arts and Festivals Management) to go to as many performances as possible and see as much of the city as they could. And they really took us at our word! They went all over New York and tired themselves out! They saw experimental avant-garde work, musicals, site-specific shows, even basketball in Brooklyn! And many of them were moved by the 9/11 memorial and impressed by snowy Central Park, the Empire State, Times Square and the Rockefeller Centre. The tour of the Lincoln Center was one of my highlights - what an incredible venue! Suffice to say we had a brilliant time. Everyone (including those faculty who travelled over) were really inspired by our experiences. I came back feeling really energised and creatively excited - MOMA always does that for me!

Here's a couple of photos from the trip: Central Park in the snow and the picture of all of us taking over Times Square! 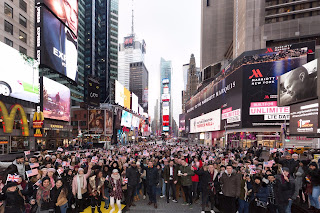 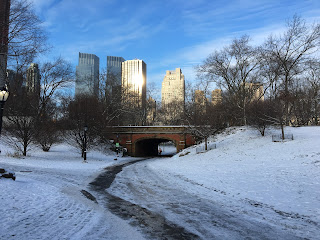 It was an amazing opportunity for the students...and we had a fab time too. Got back on Tuesday and was straight back into term. So I'm spending today catching up with a bunch of jobs I have been putting off. No doubt you will get an email from me today!

The next few weeks include a couple of wee trips (to London and Cumbria) but in general we are at home getting into good schedules and enjoying a bit of peace after a super busy conclusion to 2016.
Wishing you a very happy 2017 one and all!
CSW
Posted by Claire at 16:11 No comments: